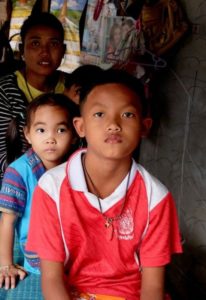 Kew, a fourth grader with big round eyes and an immense love for drawing, lives in a small run-down house with his mother, younger sister and grandparents. His house is on the outskirts of a slum, an overgrown jungle coming down to meet it out of the back door.

On the wall just outside the door of Kew’s house, they etched a child-like picture into the cement: a man, his arms outstretched and a big smile covering his face.  Beside him, in the round Thai script, they wrote, “This house is waiting for Pa.”

His dad went to prison months ago and Kew’s mom found herself trying to scrape enough together to send Kew to school and to find food for her two children. She needed a job and she prayed to God to help her find work.

Now, every morning at five, she gets on her motorcycle and drives to work at the local gas station, pumping gas for a few Thai baht.

Education Matters has been assisting Kew and his family for over a year, even before his
Dad went to prison. By helping Kew and his mother with a simple thing like paying for transportation to get Kew to and from school, Kew is able to get an education.

Today he gets up every morning, puts on his school uniform and has the privilege to go to school and learn. He has the opportunity to get an education, learn to read and write, and maybe someday he’ll get up every morning a university student.