The History of English Lake Church 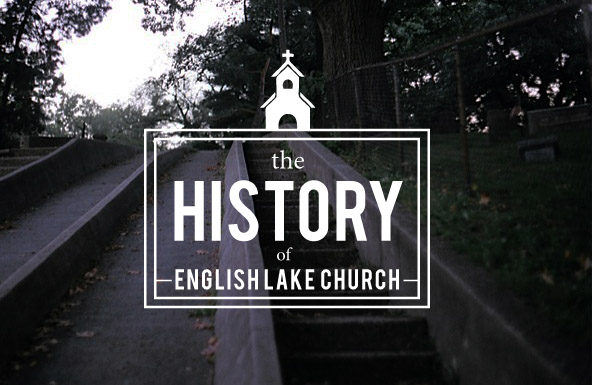 Following World War II a hunger to reach out into “unchurched” areas was being experienced by multitudes of congregations. Hopewell Mennonite Church, located at Kouts, IN, was one of them. The first fruit of this stirring was their hosting of a “Summer Bible School” in the community of English Lake in 1949.  There was an unused, four-room school house that was utilized for this occasion.

Following this event some of the “community elders” asked if there could be a continuance of ministry. This request was taken back to the Hopewell congregation, and three couples (Emmanuel & Elsie Birky, Glenn & Gertrude Prough, and Chauncey & Lelah Birky) stepped forward to plant a ”church” into this local area. They formed the core of what would grow into English Lake Mennonite Church. Volunteers from Hopewell came for years to assist with the work via yearly commitments. Early into this work Emmanuel Birky was acknowledged as pastor and would serve in this capacity until his retirement during the month of January 1971.

In 1957, a new meeting house was built just north of the old school house, and the old school house was demolished. Ross Good was the general contractor of this new structure, and his son, Jim, assisted on this building.  Jim and Lara Mae Good made English Lake their new church home and served here until joining the new work birthed out of ELC into Kouts in 1986.

In September of 1970, Art and Louise Good were invited to come and assist with the ministry at English Lake Church. Louise stated that the first Sunday they were there she knew she was “home”. They served in different capacities and into many areas of need under Emmanuel Birky’s guidance. On January 23, 1972, they were licensed into pastoral ministry following Emmanuel’s request to release his pastoral responsibility (due to age) and a time of discernment and affirmation by the ELC church body. A parsonage was placed on the church property in 1974, and an addition to the existing church building in 1975.

It was during the 1970s that the church encountered a powerful move of the Holy Spirit. Harold Gingerich of Topeka, IN was instrumental in its initial steps. A new freshness from God poured over the church. People began to be more aware of hearing God’s voice and obeying what He said to do.  Along with this was an emphasis on solid teaching from the Word that served as a plumb line for what was being experienced.  As the Holy Spirit touched people, a new love and passionate zeal for God took hold. ‘Worship’ began to take on new meaning…with new and living expressions of personal love to God.  There were healings and miraculous works, prophetic words, tongues of praise and worship, and tongues with messages of interpretation.  There were also words from the Lord that were spoken for individual people. These were very encouraging and exhorting, and fanned peoples’ faith in God for the impossible things in their lives. There was also a deepening of peoples’ desire for the Word of God and discovering of its truth.  As these things happened, people began to come from all over, and experience their own touch of salvation and being filled with the Holy Spirit. People who had been on drugs and living sinful lives came. People who were tired of ‘religion’ and needed a fresh touch from God came. Vanloads of hippies coming from Valparaiso made their way to the front pews. With such a mixture of people, the church soon grew beyond a denominational expression and became known as English Lake Church.

Knowing that it was not good to be an isolated congregation, God brought connections through Art with other persons and congregations who were of like mind.  These connections eventually grew into our extended family, called “Foundation Ministries” (now Foundational Concepts).  It was also at this time that God joined us to a family of churches worldwide, which is called Salt & Light Ministries.  God also brought other people to assist with the needs that were expanding: Lee & Joan Hershberger, Don & Gail Atkinson, and others who impacted and deepened what God was doing.  As leadership demands increased, the Biblical understanding of a team leadership was embraced.

Then, as numbers grew, there came a necessity to know God’s direction for possible expansion.  As this was brought before God, a clear directive was heard that we were not to “build bigger”, but to “plant outward”.  During the next decade two church plants were initiated: Cornerstone Community Church in Kouts, IN, and Living Word Church in Knox, IN.  Also, missionary works were initiated with Christ For All Mission in Nigeria, and different works in Mexico.

ELC passed through a difficult season in the 1990s as the work in Knox faltered.  God provided help through Rod and Ilene Lawrence who assumed pastoral ministry in 1995.  They not only helped through a recovery process, but were also instrumental in helping the ELC family return their focus to touching the surrounding community again.  Rod began the work of Love, In the Name of Christ in Starke County and led this ministry until God sent them out from us to reach into an underprivileged community in Benton Harbor, MI.

Which brings us to the present… the leadership team, along with the family of ELC, are growing together in hearing God’s leading and encouraging each other to walk in God’s mandate to ELC…”a flannel-shirt community” moving toward seeing “a witness in every community”.