23 And Paul, earnestly beholding the council, said, “Men and brethren, I have lived in all good conscience before God to this day.”

2 And the high priest Ananias commanded those who stood by him to smite him on the mouth.

3 Then said Paul unto him, “God shall smite thee, thou whited wall! For sittest thou to judge me according to the law, and commandest me to be smitten contrary to the law?”

4 And those who stood by said, “Revilest thou God’s high priest?”

5 Then said Paul, “I knew not, brethren, that he was the high priest; for it is written: ‘Thou shalt not speak evil of the ruler of thy people.’”

6 But when Paul perceived that one part were Sadducees and the other Pharisees, he cried out to the council, “Men and brethren, I am a Pharisee, the son of a Pharisee: for the hope and resurrection of the dead I am called into question!”

7 And when he had so said, there arose a dissension between the Pharisees and the Sadducees, and the multitude was divided.

8 For the Sadducees say that there is no resurrection, neither angel, nor spirit; but the Pharisees confess both.

9 And there arose a great cry, and the scribes who were on the Pharisees’ side arose and strove, saying, “We find no evil in this man; but if a spirit or angel hath spoken to him, let us not fight against God.”

10 And when there arose a great dissension, the chief captain, fearing lest Paul should be torn to pieces by them, commanded the soldiers to go down and to take him by force from among them, and to bring him into the castle.

11 And that night the Lord stood by him and said, “Be of good cheer, Paul; for as thou hast testified for Me in Jerusalem, so must thou bear witness also at Rome.”

15 But the Lord said unto him, “Go thy way, for he is a chosen vessel unto Me, to bear My name before the Gentiles and kings and the children of Israel.

16 For I will show him what great things he must suffer for My name’s sake.”

22 And the crowd gave him an audience up to this word; and then they lifted up their voices and said, “Away with such a fellow from the earth, for it is not fit that he should live!”

23 And as they cried out and cast off their clothes and threw dust into the air,

24 the chief captain commanded him to be brought into the castle, and bade that he should be examined by scourging, so that he might find out why they cried so against him.

25 And as they bound him with thongs, Paul said unto the centurion who stood by, “Is it lawful for you to scourge a man who is a Roman and uncondemned?”

26 When the centurion heard this, he went and told the chief captain, saying, “Take heed what thou doest, for this man is a Roman.”

28 And the chief captain answered, “With a great sum I obtained this freedom.” And Paul said, “But I was free born.”

29 Then straightway those who should have examined him departed from him, and the chief captain also was afraid after he found out that he was a Roman, and because he had bound him.

30 On the morrow, because he would know with certainty why he was accused by the Jews, he loosed him from his bands, and commanded the chief priests and all their council to appear, and brought Paul down and set him before them. 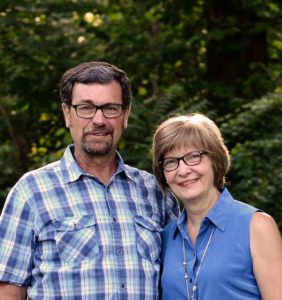 Steve and Karen have a long history with English Lake Church. They met in Honduras where Steve had grown up in a missionary family, and Karen was serving in a medical clinic.

Now married with 4 children and 4 grandchildren, Steve serves the English Lake Church family in the Bible teaching realm, and also works as a carpenter. Karen works part time as a pediatric nurse.

Their heart is for the body of Christ here (and worldwide) to be built on a solid Biblical foundation, and to live in the victory it brings.