1 Paul, an apostle of Christ Jesus by the will of God, and Timothy our brother,

2 To God’s holy people in Colossae, the faithful brothers and sistersin Christ:

Grace and peace to you from God our Father

Jesus and the Miraculous Catch of Fish

21 Afterward Jesus appeared again to his disciples, by the Sea of Galilee. It happened this way: 2 Simon Peter, Thomas (also known as Didymus), Nathanael from Cana in Galilee, the sons of Zebedee, and two other disciples were together. 3 “I’m going out to fish,” Simon Peter told them, and they said, “We’ll go with you.” So they went out and got into the boat, but that night they caught nothing.

4 Early in the morning, Jesus stood on the shore, but the disciples did not realize that it was Jesus.

5 He called out to them, “Friends, haven’t you any fish?”

6 He said, “Throw your net on the right side of the boat and you will find some.” When they did, they were unable to haul the net in because of the large number of fish.

10 Brothers and sisters, my heart’s desire and prayer to God for the Israelites is that they may be saved. 2 For I can testify about them that they are zealous for God, but their zeal is not based on knowledge. 3 Since they did not know the righteousness of God and sought to establish their own, they did not submit to God’s righteousness. 4 Christ is the culmination of the law so that there may be righteousness for everyone who believes.

5 Moses writes this about the righteousness that is by the law: “The person who does these things will live by them.” 6 But the righteousness that is by faith says: “Do not say in your heart, ‘Who will ascend into heaven?’” (that is, to bring Christ down) 7 “or ‘Who will descend into the deep?’”[c] (that is, to bring Christ up from the dead). 8 But what does it say? “The word is near you; it is in your mouth and in your heart,” that is, the message concerning faith that we proclaim: 9 If you declare with your mouth, “Jesus is Lord,” and believe in your heart that God raised him from the dead, you will be saved. 10 For it is with your heart that you believe and are justified, and it is with your mouth that you profess your faith and are saved. 11 As Scripture says, “Anyone who believes in him will never be put to shame.” 12 For there is no difference between Jew and Gentile—the same Lord is Lord of all and richly blesses all who call on him, 13 for, “Everyone who calls on the name of the Lord will be saved.” 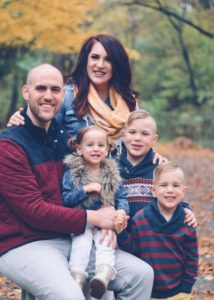 Josh and Ami live in Kouts.

They have 3 kids: Levi, Lucas and Mia. Josh manages the 1st Source Bank branch in Kouts.

They have been a part of Cornerstone Community Church in Kouts for more than 5 years.