As We Go - Stepping Into His Flow

2 Then he brought me out of the way of the gate northward, and led me about the way outside unto the outer gate by the way that looketh eastward; and, behold, there ran out waters on the right side.

3 And when the man who had the line in his hand went forth eastward, he measured a thousand cubits, and he brought me through the waters; the waters were to the ankles.

5 Afterward he measured a thousand, and it was a river that I could not pass over; for the waters had risen, waters to swim in, a river that could not be passed over.

6 And he said unto me, “Son of man, hast thou seen this?” Then he brought me and caused me to return to the brink of the river.

7 Now when I had returned, behold, at the bank of the river were very many trees on the one side and on the other.

8 Then said he unto me, “These waters issue out toward the east country and go down into the desert and go into the sea, which being brought forth into the sea, the waters shall be healed.

18 And Jesus, walking by the Sea of Galilee, saw two brethren, Simon called Peter and Andrew his brother, casting a net into the sea; for they were fishers.

19 And He said unto them, “Follow Me, and I will make you fishers of men.”

20 And they straightway left their nets and followed Him.

21 And going on from thence He saw two other brethren, James the son of Zebedee and John his brother, in a boat with Zebedee their father, mending their nets. And He called them,

22 and they immediately left the boat and their father, and followed Him.

6 Then he answered and spoke unto me, saying, “This is the word of the Lord unto Zerubbabel, saying, ‘Not by might nor by power, but by My Spirit,’ saith the Lord of hosts. 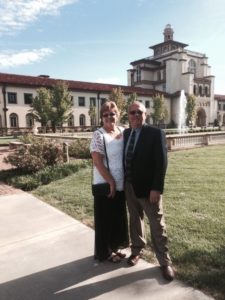 Art and Louise were married in 1968 and began attending English Lake Church in 1970. They have three married children and 5 grandchildren.

Art served pastorally, at English Lake, from 1972 until being released in the mid-nineties to serve outwardly to the greater Body Of Christ.

They continue to serve as "spiritual parents" in this season of their lives.